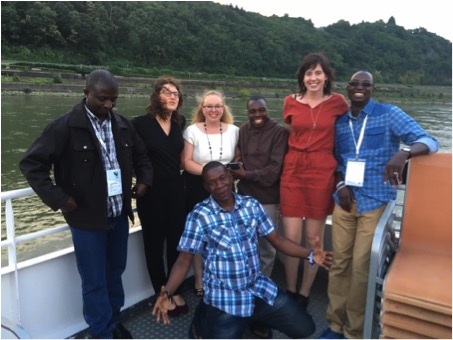 I knew I was in the right place when, during welcome drinks, the dairy crisis and genetically modified crops took up most of our little group’s discussion. Most rural journalists work and live in isolated areas, so one of the hugest joys in attending this year’s International Federation of Agricultural Journalists (IFAJ) congress was to bounce ideas off like-minded people.

Considering how unique our bubbles are, the commonalities between us were uncanny. 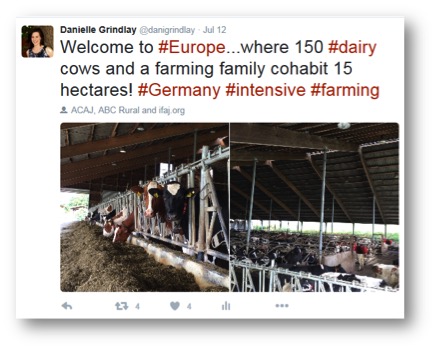 Here I was in Europe, where 150 cows and a generational farming family cohabit 15 hectares.  I remember looking at my New Zealand peer with wide eyes as we toured the large shed.  But then we sat down to lunch and next to our German host was a journalist from Rwanda, who explained that the average farm in his world was less than 1 hectare!  And yet our motley crew from across Europe, Africa, America, New Zealand, Nepal and Canada are reporting on exactly the same issues in different pockets of the world.  During our week of animated discussion, I gained new insight into climate change, rural decline, government policy, innovation, technology and the place of agricultural journalism in society.

I sat through a panel discussion about sustainability in German agriculture – if it wasn’t for the German language, we could have been having exactly the same discussion in Australia.  My ‘Young Leader’ peers also share a frustration at how undervalued both agriculture and agricultural journalism is in our respective countries.

Many of them were concerned about job security and spoke of national publications’ resistance to publish stories about agriculture and rural life. They were an outstanding group of journalists, but also just wonderful human beings: Although the duration of the congress was spent in Germany, I took home tid bits of culture from a long list of countries.

One of the strongest messages I packed in my luggage relates to my function as a rural journalist in Australia – I am not working to serve farmers, nor the greater agricultural community.  My job is to engage every Australian in the dairy crisis and the philosophical debate behind genetically modified crops, because consumers are key to shaping the policies around primary production and the future of our nation.

Also reinforced was how unique and undervalued the IFAJ network is.

We, like farmers, are a global community and the decisions made on that 15-hectare farm just outside of Bonn, are as relevant to an Australian audience as they are to the people of Germany. The plight of farmer Jorg Rossenbach is, sadly, one most Victorian dairy farmers relate to: a milk cheque that covers just 70 per cent of his productions costs.

But how do Government subsidies play a part? And how are consumers supporting farmers? What are farmers saying about quota restrictions?

I now have invaluable contacts willing to answer questions like these, so I too can better comprehend and report on the market forces that impact farmers and consumers alike. It is difficult for an outsider to observe how the IFAJ congress has shaped my career, back in my regional corner of Victoria.

It gave me something I’d already been faking since starting with ABC Rural – a confidence and belief that my work is meaningful, that the life path I’ve chosen in some way matters. It is a gift that drives me forward every day and one I highly recommend any regional Australian journalist consider chasing to Africa next year, for the 2017 IFAJ congress.