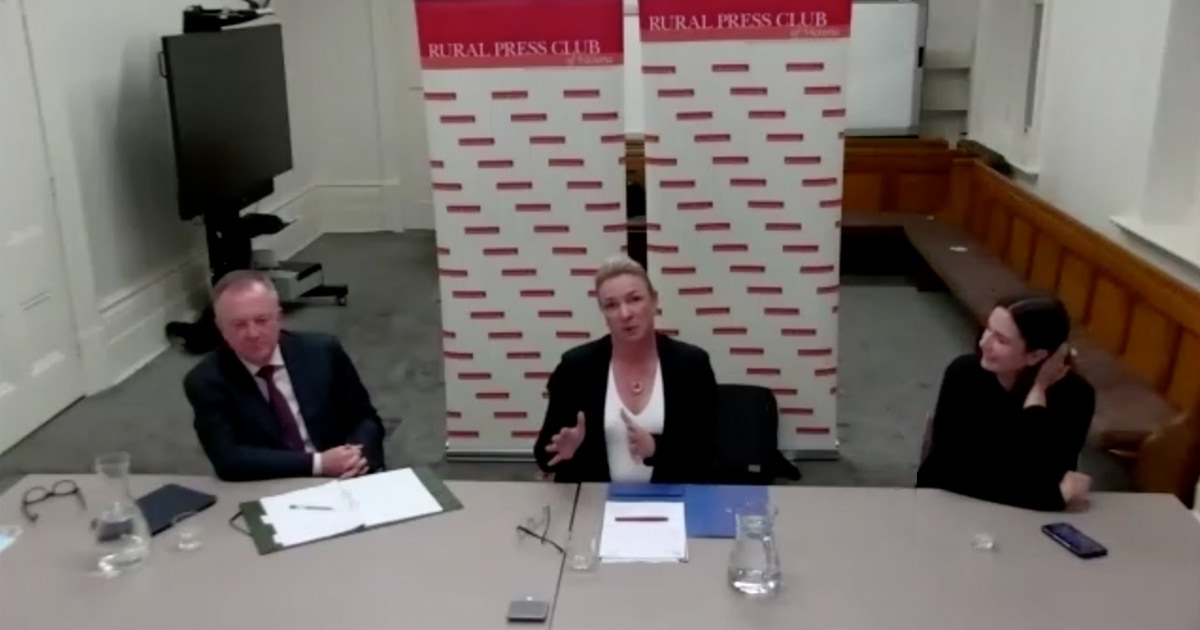 Victoria’s regional and rural media were given a detailed and candid insight into the workings of the state’s legal system at a webinar hosted by the Rural Press Club of Victoria last Thursday.

Court of Appeal judge Richard Niall, SC, opened the discussion by outlining the process by which a criminal charge proceeds through Victoria’s court system on its way to trial.

He said the forum – which was recorded and can now be viewed online at ruralpressclubvictoria.com.au – was aimed at helping journalists improve their understanding of the legal process.

“One of the purposes of tonight is to try and explore, amongst the three of us, some of the pitfalls and tips of reporting, particularly a trial, and the dangers of coming in when your editor says go down and report on a trial that’s been going on for three weeks … and you don’t have the context … and its very difficult to make a fair report if you don’t have the bigger picture,” Justice Niall said.

More than 130 people registered in advance to attend the webinar. It provided a rare – and free – opportunity for working journalists and those aspiring for a career in the media to hear Justice Niall – Victoria’s former Solicitor General – away from the bench at the Court of Appeal and pose questions to him and the other panelists.

Silk Sally Flynn, QC, is a prosecutor and defence lawyer who has worked on a number of high profile Supreme Court murder trials.

The vice-president of Victoria’s Criminal Barrister’s Association, she explained the different mindset lawyers might bring to a case depending on whether they are prosecuting it or defending an accused person. She told aspiring court reporters to be aware their work would always be closely scrutinised.

“As a barrister in trials, the first thing you do in the morning is scan through your news feeds, to see if the trial’s been reported. If so, (look at) what has been said, and if there’s something in there that was not said in front of the jury or is said to be wrong, it’s a matter we would certainly raise with the judge,” she said.

Tammy Mills has carved out an impressive, decade-long career reporting crime, courts and legal affairs at The Age after getting her start in journalism at the Shepparton News and The Border Mail. She explained the way seasoned court reporters build relationships in the courtroom so they can better understand how a case might run and also get their head around complex legal arguments.

“I think a helpful tip is to introduce yourself to the legal team of both sides when it’s appropriate,” she said.

“The best court reporters in the business are the ones that know how to make contacts. You go and talk to the people who are involved in those cases, and you strike a relationship, and you get information, not necessarily about that court case but about anything else interesting that’s happening around the courts.”

The format of the webinar, held at night, was a break from convention for the RPCV, aimed at maximising the possibility of working journalists attending from across regional and rural Victoria.

“We were really pleased with the engagement in this forum, and the fascinating conversations it provoked between our three panelists. We’re grateful to Justice Niall, Sally Flynn and Tammy Mills for making their time and expertise available, and also to the Supreme Court for its support,” RPCV president Bryce Eishold said.

Attendees were told about how the media units of Victoria’s courts strive to assist journalists in tracking cases, accessing documents and transcripts and understanding the often complex legal system, and an up to date list of court media contacts was provided to all those who registered for the forum.

To view the recording of the webinar visit ruralpressclubvictoria.com.au and we welcome your feedback about the format via email at bryce.eishold@austcommunitymedia.com.au.